A Message from the School Chair 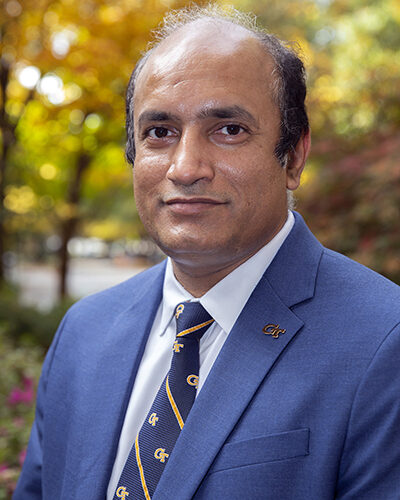 Welcome to the George W. Woodruff School of Mechanical Engineering at Georgia Tech!

I am excited, humbled, and honored to serve as the Eugene C. Gwaltney School Chair as of January 1, 2022.

With almost 3,000 students, more than 100 professors, and 70 staff members we’re a big and diverse school, and that gives us the chance to do a lot of interesting things inside and outside of the classroom. Our students get their hands dirty from day one in labs and makerspaces, and quickly learn that the key to graduation is collaboration, whether that’s in our ME 2110 Creative Decisions and Design class or in informal study groups.

The Woodruff School strongly believes in encouraging experiential learning activities in all of our programs. We offer an integrated set of lecture, design, and laboratory courses that help to push and prepare our students to address demanding engineering challenges. More than half of our students participate in a study abroad program at the undergraduate level through our Georgia Tech Lorraine campus in Metz, France and other locations around the world. We’ve invested in a world class, student-run makerspace to allow students the freedom to prototype and explore ideas that they develop in class or on their own time for fun. This makerspace, known as the Flowers Invention Studio, provides a variety of resources open to all students and includes 3D printers, water jets, laser cutters, woodworking tools, and an electronics bench. Our students are also very active with Georgia Tech’s seven student competition teams which include Solar Jackets, GT Off-Road, and RoboJackets. Students with an entrepreneurial spirit have outlets as well, and are encouraged to enter their inventions in the Inventure Prize or participate in CREATE-X, a Georgia Tech initiative to instill entrepreneurial confidence in students and empower them to launch successful startups.

At the graduate level, we perform research in Mechanics, Robotics and Automation, Thermal Sciences, Energy Systems, Bioengineering, Fluid Mechanics, Nuclear and Medical Physics, Acoustics, Tribology, Design, Manufacturing, and Machine Learning. We currently exceed $40M in new research awards annually which provides for a rich set of research opportunities in world class facilities at Georgia Tech. We have invested in major facilities updates in recent years including the Advanced Manufacturing Pilot Facility and an expansion for our Robotics and Automation research group. The Woodruff School plays a strong role in several Interdisciplinary Research Institutes on campus including the Institute for Bioscience and Bioengineering, Institute for Electronics and Nanotechnology, Georgia Tech Manufacturing Institute, and the Strategic Energy Institute. We also have strategic partnerships with several DOE National Laboratories that also give our graduate students unique opportunities for research.

The Woodruff School of Mechanical Engineering is an inclusive, innovative, and thriving educational and research environment that is making significant contributions to society by producing engineers and technology that will change the world. We invite you to explore our website and we look forward to the opportunity to interact with you in the near future.

A Brief History of Georgia Tech and the Woodruff School

A school of technology was established in Atlanta in 1885. In October 1888 the Georgia School of Technology opened its doors and admitted its first engineering class: 129 mechanical engineering students enrolled in Tech's first degree program. As part of their education these early students worked at trades such as forging, woodworking, machining, and mechanical drawing. The products of these shop exercises were then sold to the public to produce income for the School.

Over the years, the mechanical engineering program expanded and changed. By 1896, the contract system of shops had been abandoned. Free from the need to render a profit on instructional time, Dr. Coon implemented an educational format which, while it retained elements of hands-on shop training, placed more stress on the emerging tenets of quantification and analysis. Dr. Coon revised the curriculum, describing a mechanical engineering program that emphasized design, mathematics, and problem solving. Prominent here was a senior thesis, which was an experimental laboratory project emphasizing design and testing. The experimental project requirement survives today as the capstone experimental engineering course.

The notion that an engineer was a technical master first and a businessman second permeated the curriculum of Georgia Tech at the turn of the century. Mechanical engineering students conducted efficiency tests for businesses in Atlanta and experiments using campus facilities. Practical projects at local businesses became a significant part of the educational process at Georgia Tech, especially after the Cooperative Program officially began in 1912. This continues to be the largest optional program of its kind in the country. About forty percent of all mechanical engineering undergraduate students at Georgia Tech are involved in the program. In addition, there is a Graduate Co-op Program, an International Co-op Program, an Undergraduate Professional Internship Program, and a number of study-abroad programs for students to gain international experience.

Tech graduated its first two students, with bachelor's degrees in mechanical engineering, in 1890. The first MSME was authorized in 1922, and a doctoral program was added in 1946. The first MS degrees were awarded in 1925, and the first Ph.D.'s were granted in 1950. Georgia Tech was renamed the Georgia Institute of Technology in 1948. Women were admitted in 1952, and the campus was voluntarily integrated in 1962. In 1949, the Department of Mechanical Engineering officially became the School of Mechanical Engineering with its own director and administrative staff. In 1985 the School was named for its benefactor, distinguished Atlanta business and civic leader, the late George W. Woodruff (class of 1917).

In 2000, the American Society of Mechanical Engineers recognized the Woodruff School as a Mechanical Engineering Heritage Site. Of the 225 landmarks, sites, and collections, we are the only educational institution with this honor, which was granted for the impact that mechanical engineering education at Georgia Tech had on the South and the nation.

Graduates from Georgia Tech have always had a hand in helping build industry in the South. This is as true today as it was when Georgia Tech was opened in 1888 and began to educate engineers and revitalize the economy of the South, devastated after the Civil War. Today's rigorous engineering curriculum allows our students to continue to have a lasting impact on the global society.

Undergraduate and Graduate Programs are consistently highly ranked in the US: 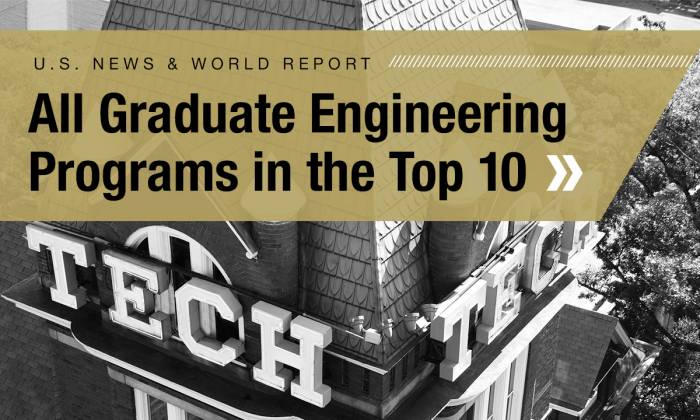 We have over 100 full-time, tenure-track faculty (all with Ph.D.'s), including 36 adjunct appointments from other schools on campus. There are also 57 research faculty and 8 academic professionals to support research and teaching.

In fall 2020, the enrollment in the Woodruff School included 1,803 undergraduate students and 856 graduate students; of those 602 are women and 417 international students.

Woodruff School students participate in a rewarding, hands-on experience and belong to a number of highly successful groups that compete at the regional and national level:

Professional organizations with student chapters include: